HOW TO DECIDE BETWEEN A CATHOLIC BIBLE AND A PROTESTANT BIBLE

The additional books and material in the Catholic Bible are: the books of Tobit, Judith, 1 Maccabees, 2 Maccabees, Wisdom, Sirach, Baruch, and also Psalm 151, scattered parts of the book of Esther, and Daniel chapter 13 and 14. Protestants refer to this material as the Apocrypha. The differences became established during the Protestant Reformation of the 16th century, when the Protestants determined to include only those books for the Old Testament that, by then, had become the Hebrew canon. 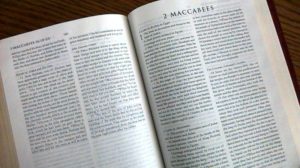 The Catholic Bible has additional text

If you are a Protestant, but have an interest in owning a Catholic Bible I would suggest you buy one that has the Apocryphal material separated out from the rest of the Old Testament text in a separate section. This essentially gives you a Protestant Bible with additional material.

There are several translations of the Catholic Bible available in modern English. The most popular translation is the New American Bible Revised Edition (NABRE) that was published in 2011. The New Revised Standard Version (NRSV) published in 1989 is also widely available and can be found in both Catholic and Protestant editions. The Douay-Rheims is the earliest English translation from the Latin. It was first published in 1899, so is not modern English, but is still well-loved.

There are limited options for devotional Bibles in Catholic versions. I have found only two. If you know of others, drop me a line with the email form. I’m happy to check them out and include them. The two I found were the New Catholic Answer Bible and the Catholic Women’s Devotional Bible. The Answer Bible is in the NABRE translation and includes answers to 88 of the most common questions that Catholics are asked about their faith. The Women’s Devotional Bible is in the NSRV translation. It has a year’s worth of meditations drawn from classic and contemporary sources, all written by women, as a supplement to the text of the Catholic Bible.

Get your free copy of “How to Read the Bible”

The Gospel of John

Study Questions for Groups and Individuals
Click for more information

Scroll back to top